Perspective in photography is important because it creates an illusion of a three-dimensional scene. Because your camera is only capable of capturing a two-dimensional image you have to use different techniques to get the 3D effect our eyes are capable of seeing. Perspective makes an object look further away or closer relative to other elements in you scene.

Unfortunately, a lot of photographers don’t consider the perspective when composing their images. The reason for this is most likely a lack of understanding of how perspective works.

To be able to show how the different elements separate from each other in a 2D photo, you have to learn how to create depth and dimension. When you arrive at a scene, it is also important to take some time and look around you to find the best spot. Often the first composition you make is not necessary the best.

There are several techniques you can use to get the feel of a three-dimensional scene. One of them is light and shadow. Light illuminates while the shadows define. This is why the best time to photograph landscapes is at sunrise and sunset. At these times when the sun is low on the horizon, you get these nice long shadows.

In Black and White photography, light and shadows have an even more important role. The contrast between tones of light and dark is what makes a good B&W image. For the rest of this article, I will focus on the use of different perspective as a tool to create depth. 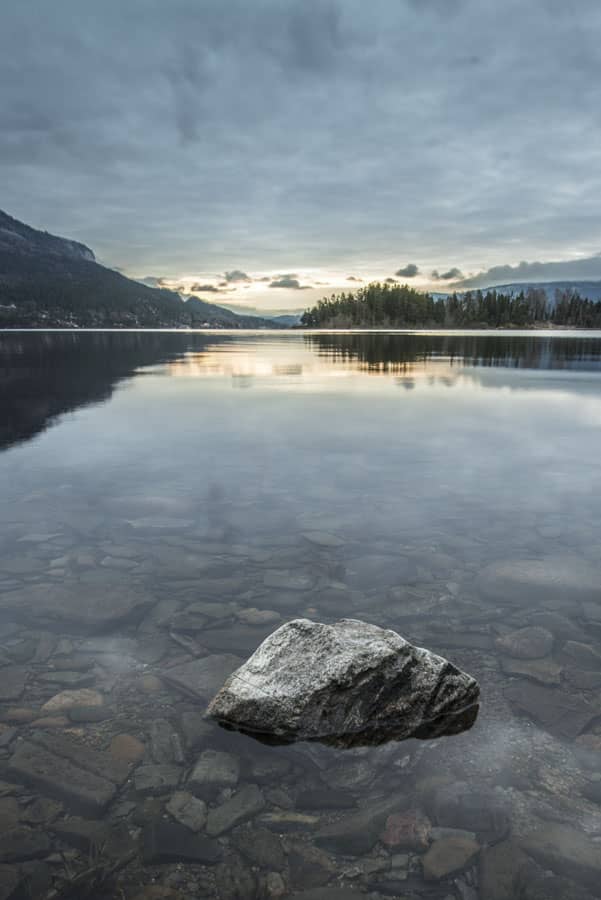 Different types of perspective in photography

There are several types of perspective, and I will discuss all of them here. Some of them are more relevant to landscape photography than others, but they are all worth knowing.

Is probably the most common use of perspective in photography. If you see a photo of a road that moves into distance, it seems the road is getting narrower the further away it goes. This effect when converging lines recede into the horizon is something our eyes and brain interpret as distance.

In a landscape photo, the ground area rises towards the horizon. The place where the base of an object is located on the ground in a photo give us an idea of the objects distance from the camera. The higher up in the ground area of the photo the base of this object is located, the further away from the camera it seems to be, and the greater its height perspective is. This article explains nicely how height perspective works. They also have a great animation making this easy to understand.

Overlap perspective in photography is when one object overlaps another and our brain immediately knows the object in front is the nearest of the two. If several object repeatedly overlaps in the same frame, we get a sense of depth and dimension.

Overlap perspective is very important for landscape photographer and another useful composition tool you can use to show depth in your images. When you compose your photos, you must consider all the elements in the frame and try to position them in such a way they all give meaning to what you want to achieve.

With two objects of the same size and one of them closer to the lens, the nearest will appear being bigger than the object further away. The nearest fence post in a fence receding into the distance will look bigger than the ones furthest away.

The closer you are to the object the bigger it appears in the photo. If you move into a scene, the nearest objects will increase in size faster than the more distant objects. This effect is even more pronounced when using wide angle lenses.

Due to the effect of the atmosphere containing dust particle and humidity, contrast is highest for objects closest to the camera. Similar colors are clearer and more saturated close to the camera. As the object is further away, the colors get more and more dull and grey(ish). Warmer colors show up better on the near subjects.

Another effect of the atmosphere is object near to the camera seems sharper or more in focus. The further away the objects are the softer focused they appear. They seem to be flat and dull due to the lower contrast.

Because of this effect you might want to soften the focus on the nearest object if your main subject is the one in the distance, for example, a snow covered mountain. If you are out photographing in weather with haze, fog or rain, areal perspective is something you must consider as the effect increases under these conditions.

If you have a flower or a bunch of flowers very close to the lens and a mountain in the distance, the flowers will appear huge compared to the mountain. Such a composition gives the photo dimension and depth.

A typical creative use of forced perspective in photography is the tourist photos where someone “hold” the moon or Taj Mahal in India between their fingers - like up in the air.

So keep practicing by using different perspective when you are out photographing. You will be amazed how perspective can change your photos.

A good way to practice is to use a fixed angle prime lens. As you can not zoom with this lens, it will force you to move around for the best viewpoint. If you only own a zoom lens, try taping the zoom ring in one position and photograph with the lens at this setting.

Don't be tempted to remove the tape and zoom if you can not find the perspective you want.