What is aperture and how does it affect your photos? - Landscape2Art

What is aperture and how does it affect your photos?

What is aperture is a common question when you start with photography. Simply explained aperture is the opening inside the camera lens. The mechanical part is a diaphragm made of several blades which can be adjusted to change the size of the opening. The purpose of the aperture is to control how much light you let into the camera sensor. A wide opening let in more light and a small let in less light, which is logical.

How is aperture measured

Aperture values are given as f-numbers. The f-number is the ratio between the focal length and the effective size of the aperture opening of the lens. Using ratio is a way to standardize and make aperture independent of which lens and focal length you are using.

Provided shutter speed and ISO are unchanged, you maintain the same exposure for a given aperture (f-stop) independent on which lens you use or its focal length. As an example, a zoom lens at 200mm and f2,8 let the same amount of light into the camera as a fixed focal length lens at 50mm set to f2.8.

The counterintuitive effect of using ratio to measure aperture is, the smaller f-number, the more light is let into the camera. With a bigger f-number you let less light into your camera. You simply need to think opposite to understand what aperture is.

Aperture varies with the focal length

How much light a lens collects at a given aperture depends on the focal length. If you have a zoom lens you’ve probably seen the aperture is given as a range.

For example, a 28-300mm lens can have an aperture of f3.5-f5.6. Such a lens has a variable aperture depending on the focal length the lens is set to. The widest aperture f3.5 is only available when you zoom the lens all the way out to 28mm. When you zoom in to 300mm the widest aperture you can use is only f5.6 making the lens less light sensitive.

More expensive zoom lenses have fixed aperture throughout the whole zoom range. These lenses are bigger and heavier compared to the less light sensitive ones with variable aperture and the same zoom range.

How aperture change the look of your photos

1) A brighter or darker image - exposure.

2) An image with more or less Depth of Field.

As mentioned the purpose of the aperture is to adjust the exposure by letting more or less light into the camera.

Another effect of changing the aperture is you can control how much of the photo is in focus. You have probably seen photos where the main subject is sharp (in focus) while the background is totally blurred. This is the effect of Depth of Field and the use of a wide aperture opening. If you want more of your photo in focus, you can stop down the lens further (a higher f-number).

It’s important to understand Depth of Field is also dependent on the focal length and the distance from the camera to the subject.

Another less know effect of the aperture is the starburst effect. There are dedicated filters to create star effects, but you can do it with any lens with no filter in the front. The star effect I am talking about is the one you see around bright light sources like the sun. You can create the effect by stopping down the lens to one of the smallest apertures.

Any bright spots as the sun in the frame will have starburst around them. The higher the aperture is, the more pronounced the effect is. The number of rays created is dependent on the number of aperture blades in the lens. 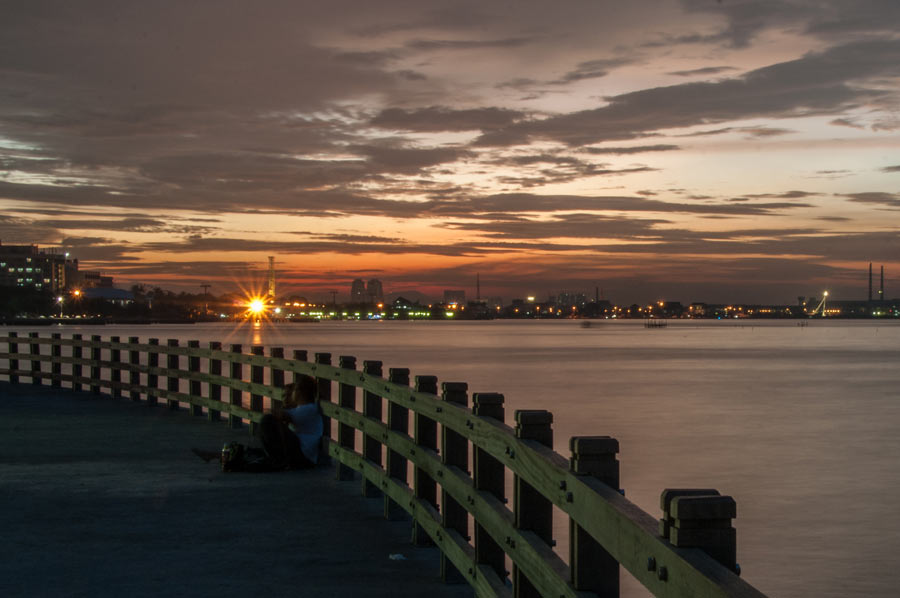 I got the starburst effect around the setting sun at Ancol beach, Jakarta in Indonesia by using an aperture of f25.

What is correct aperture?

The answer to this is there is no right or wrong aperture. You set the aperture based on how you want the image to look.

If you have plenty of light and you have no preference for the Depth of Field you should set the aperture at f8-f11. The reason for this is most lenses are at their sharpest (the “sweet spot”) around f8-f11. This is not a huge issue as most none photographers will not be able to tell the difference.

It is more likely other mistakes will make your photos blurry, such as camera shake or wrong focus point. If you use a tripod and your focusing technique is good it does not hurt to use apertures around the lens “sweet spot”.

If the light is limited such as at night, you will probably need to use the lens widest aperture (lowest possible f-number) to get a proper exposure.

Most lenses are not at the sharpest when wide open. Most lenses benefit from being stopped down one or two f-stops if the light allows. Similarly to the “sweet spot”, I don’t hesitate using my lenses at the smallest aperture if the light conditions require this. It’s better to have a slightly soft image than an underexposed image.

When light waves pass through a very narrow opening (small aperture) the waves get bent and scattered. This happens when the wavelength of the light captured is near the size of the aperture opening. This effect is what we call diffraction. The result is a less sharp image.

In DSLR’s diffractions starts kicking in at around f16. If you stop down a lens beyond f16, you might risk the effect of increased Depth of Field is eliminated by a decrease in sharpness of the area in focus.

The effect is minimal, and I don’t care much about this. I use my lenses at the required aperture for a given scene. For photos posted on the Internet, you will not be able to tell the effect because the image is scaled down and the diffraction is "hidden." If you plan to make huge prints, the effect might be visible. But how many of us make poster size prints.

I would not hesitate to set my lens to f22 to get sufficient Depth of Field if that’s required. I rather get the shot I visualize rather than being hung up on technical details that hardly anyone except (some) photographers recognize.

In smartphones and cameras with small sensors the aperture size is limited by the physical sensor size. Because the real aperture opening is very small, diffraction starts earlier in these cameras. Therefore the smallest aperture is often no more than f8 in these cameras.

Another important effect of small sensor size is the increased Depth of Field even at the widest aperture. Changing aperture from f8 to f3.5 will make very little difference to the Depth of Field. Unless you are very close to the subject you will have a huge DOF at any aperture with these cameras. You simply can't blur the background.

For landscape photographers, this is an advantage as we want as much as possible from foreground to background to be in focus.

I have talked to many photographers experiencing problems when they upgrade from smartphones to DSLR. They struggle to get their photos sharp. Part of this is explained with the shallow DOF you get in a DSLR with a bigger sensor. Exact focus becomes much more important when you use a DSLR. 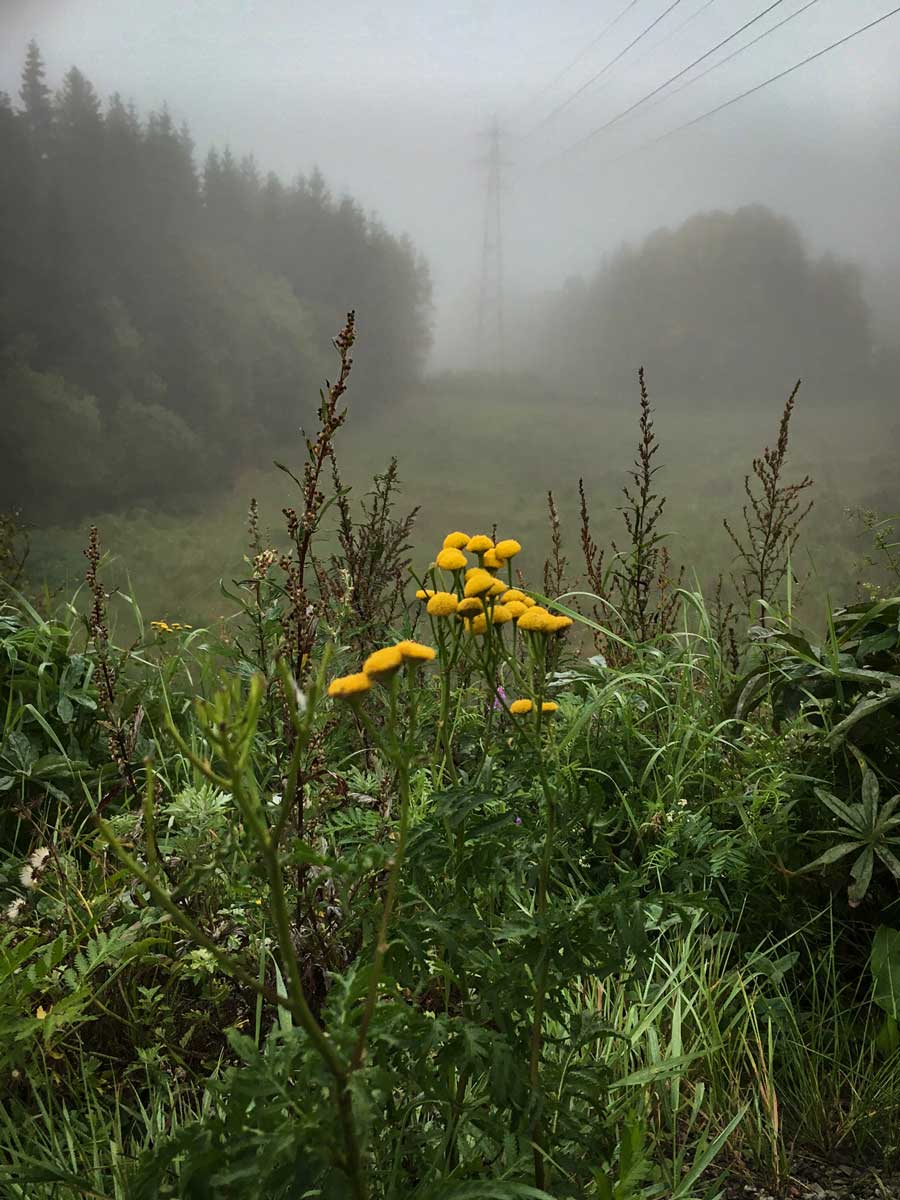 In this snapshot taken with my iPhone the yellow flowers are less than 30 centimeters away from the camera lens. The closest part of the flower (to the left) is around 10 centimeters away and slightly out of focus. Worth noting is the trees and the electric pole in the background are in acceptable focus. It would not have been possible to take the same shot with a DSLR as the background would have been out of focus due to the narrow Depth of Field in the bigger DSLR sensor.

Aperture is one of the three functions that makes the Exposure triangle. Together with shutter speed and ISO you can control the exposure. Aperture is important when you decide how much of the image you want in focus. Missing on the aperture setting does not have the same impact on a photo as if you missed with the shutter speed.

I've changed the Facebook comments plugin on the blog to a more modern plugin.
I have kept the old comments as a sceenshot below.

Please feel free to make your new comments in the gray box below the Facebook screenshot.

Photography exposure in high contrast landscape scenes
Why RAW files are the best choice to get the most out of your post-processing
What is focal length and how can it improve your landscape photos?
The photography histogram – a little known tool to help you make better photos. 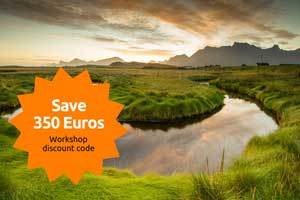