Why attend a landscape photography workshop?

Understanding how we read photographs is essential in all photography. Most of the time we flip through photos without paying attention. One reason might be the photos are not interesting enough to make us stop. There is nothing in the photos catching your eyes.

When was the last time you looked at a picture that had an impact on you? Do you remember which photo it was? Why did you stop with this photo? Have you ever wondered what makes you want to take a closer look at an image? Obviously, something in the picture caught your attention, but what?

To understand this, you need to know how we read photographs. Let’s first take a look at how we read a text.

How we read an article

A well-written article has a strong headline. The headline is intended to catch our attention. The writer only has a couple of seconds to convince the reader whether to read further or leave. The headline is the most important in any article. If the headline doesn’t make you stop it does not matter how good the content is, your gone.

Next, the article should have a great introduction. The first lines of the article must be interesting and convince the reader to continue to read.

A well-written article is built up of smaller paragraphs. Paragraphs make the content scannable and easy to consume. Preferably there is a natural flow bringing the reader from one section to the next. Subheadings break the article down into smaller chunks which are easier to read.

How we read photographs

OK, so now let's take a look at how we read photos. The principles are the same. To stop and make you want to look closer at a photo the photo must have a something appealing, a stop effect.

A good photo has a focal point which should be the main subject. Typically, warm and saturated colors make us stop. This is why photos with orange or red often get attention. It’s like the headline in an article. If it’s good it makes you want to read further. But an orange sunset is not enough if the rest of the photo has no interest or a bad composition.

The composition should make the viewers eyes move from element to element and eventually back to the main subject. You can do this by using different techniques. One of the most powerful is leading lines. Lines guiding the eyes through the photo are equal to how sub-headlines take the reader throughout the article.

Visual mass influences on how we read photos

The eye is drawn to the biggest elements in the photo first. If this is not your main subject, you can make this part of the photo less evident when post-processing. You can do this by making it darker or with less contrast. 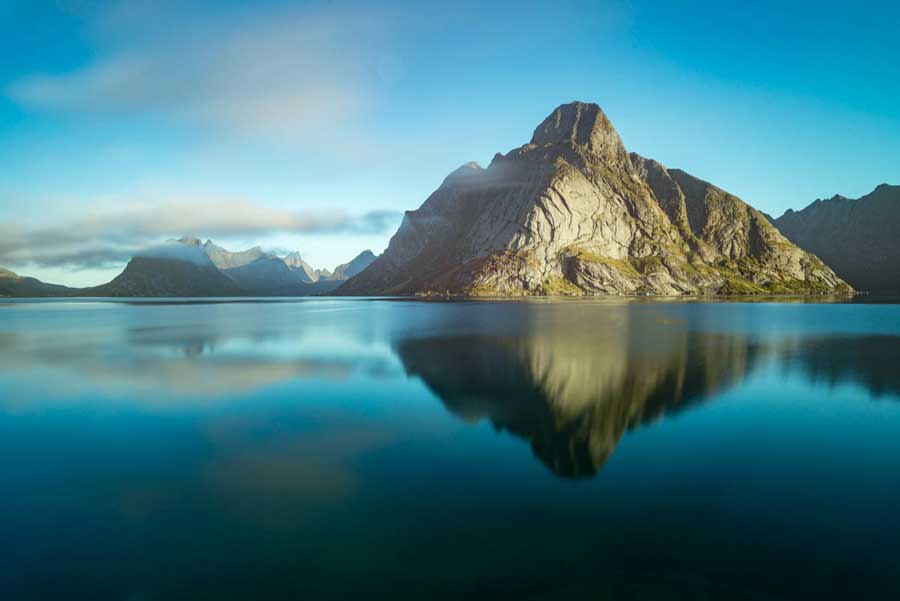 In this image the mountain is the main subject. The eyes are drawn to the biggest mountain and not as much to the smaller one to the left. Not only is the mountain the most dominant part of the scene but the triangular shape of the mountain makes it stand out. When including the reflection as well, the visual mass is even more pronounced. I have enhanced the mountain further by slightly brightening it and by adding a vignette to darken the surroundings.

The before image of the iceberg is flat and dull. By increasing the overall contrast the image looks a lot better.

Brighter areas draw the eyes. In landscape photography, a bright sky often pulls the eyes. If the sky is gray and has no interest, you can crop parts of the sky to make it less dominant. You can also try to make the sky darker. If the sky has interesting clouds, you want to emphasize this by adding contrast and color to the clouds.

In this image the flowers in the foreground are the main subjects. They are bright and in focus. However the white spot to the right in the image is annoying and unintentionally draw the eyes. The white spot has more visual mass compared to the darker trees bot to the left and to the right. The white spot is not part of the photo. It's easy to remove it in Lightroom.

The best time for landscape photography is around sunrise and sunset. The color of the light is at its warmest this time of the day. The warm light is pleasing to the eye and draw attention. Red, yellow or orange elements have higher visual mass compared to those with blue and green. Even a small orange/yellow cloud on a big blue sky pull more attention than the sky.

The dominant dark blue color in this photo is a cold color. Despite this the eyes are drawn to the small light with the warm a yellow color. In addition the light is the brightest part in the photo.

The power of lines is another important technique to guide the viewer into the photo. Lines can have many shapes from straight to curved. In general diagonal lines have more visual mass than horizontal and vertical lines. When you edit you want to strengthen important lines and minimize the visual effect of lines with an adverse impact on the photo.

The fence leads the eyes towards the sunset in the horizon. I have brightened the fence to further enhance the effect

The impact of visual mass when you edit photos

You probably already knew about some of these techniques and have used them when you compose photos. But where you aware of the impact visual mass have when you post-process your photos?

Obviously, you cannot change the composition after you press the shutter. If you messed up the composition when you took the photo, you have limited possibilities to reposition elements in the frame. You can improve to some extent by cropping the photo.

If you took a well composed photo in good light, you have a lot of possibilities to make improvements when you edit. One goal is to strengthen important parts in the photo by changing tone and color. The fact is you need to edit digital images to get the most out of them. A digital camera sensor is not as sensitive to light and colors as our eyes. If you want your photos to look anything like it did in real life, you will have to use an editing software.

When you post-process your photos, you need to think about the visual mass. What elements attracts the eyes the most in you photo? Brighten or increase contrast in important areas of the photo. Make less important parts darker or with less contrast.

Similarly, you can saturate colors in important areas and decrease color in less important areas in a photo. If the photo has leading lines (which it should), you can strengthen the effect of the lines when you edit.

You now have a better understanding on how visual mass impacts on how we read photographs. Knowing this will be of great help next time you edit one of your photos.